One thing I love about data visualization is that the same data can be drawn in many ways in order to show different characteristics about the real-world objects they represent. In college, and after graduation, I worked in a research lab (called the Scientific Database, or SciDB Lab) which developed software to visualize environmental data. One of the datasets frequently used by the lab was from a project called The 1000-year Chronosequence Study of the Western Washington Cascades (1KCS). This project collected detailed data about individual trees in eight sites in Washington forests.

Students, staff, and faculty working in this lab produced a range of 2- and 3-dimensional visualizations all based on the same data collected as part of the 1KCS project. The detailed nature of these data (including individual branch and foliage measurements) allowed for a wide variety of visualization possibilities. Simpler visualizations displayed trees in a particular stand represented by circles sized according to trunk diameter. More complex visualizations used detailed branch, foliage, and trunk measurements to recreate trees as fully 3-dimensional models, as shown below: 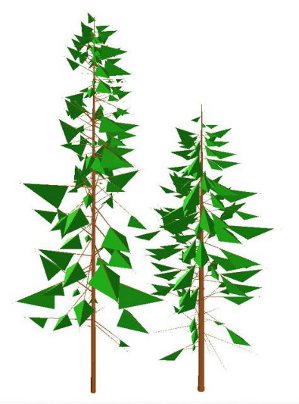 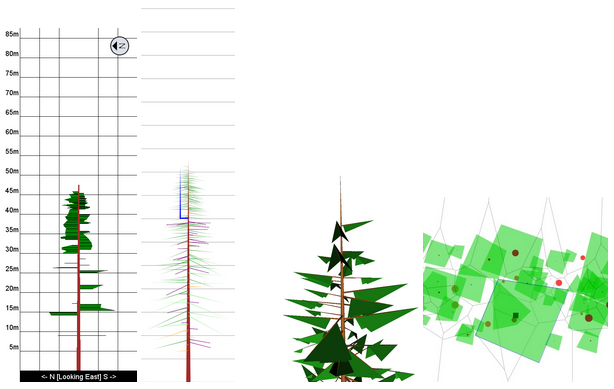 You can view the full catalog, with nearly 100 trees and more detailed descriptions of all the visualizations here.

Images are from CanopyView, an interactive canopy visualization system built at The Evergreen State College in Olympia Washington and funded by the National Science Foundation [DBI 04- 17311, CISE 01-31952, BIR 03-19309, 99-75510, 96-3O316, 93-07771] and from the Evergreen-DNR Leave Tree Project. The views expressed in this article do not necessarily reflect those of the National Science Foundation, The Evergreen State College, or The Washington State Department of Natural Resources. 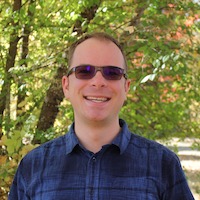 Senior Software Engineer
Nik is a Software Engineer at CBI working on Data Basin. He enjoys finding ways in which technology can aid in environmental research by improving data collection, management, visualization, and distribution.
blog comments powered by Disqus 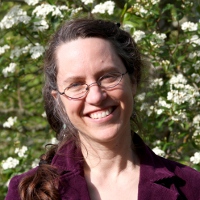 Next: Sustainability, Resilience and the New Normal