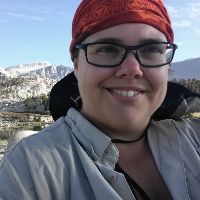 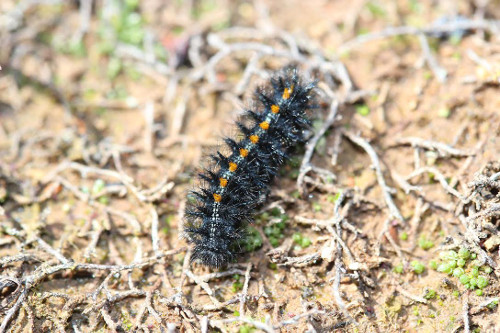 CBI, in partnership with US Fish and Wildlife Service (USFWS), San Diego National Wildlife Refuge, San Diego Zoo, San Diego State University, Creekside Center for Earth Observation, Earth Discovery Institute, and Recon Environmental Inc, is working towards the recovery of the critically endangered Quino checkerspot butterfly (Euphydryas editha quino) in San Diego County by increasing the number of stable populations and total number of individuals of this species. CBI’s Spring Strahm, M.S. is coordinating the team of biologists that supported the release of over 1,400 larvae within its native range in the San Diego National Wildlife Refuge.

The Quino checkerspot used to be one of the most abundant butterflies in San Diego County, though now it is very uncommon and rarely seen in high numbers. This species is threatened by a lack of habitat connectivity, which is key for its population structure and resilience. Primary drivers of decline include fragmentation from development and loss of suitable habitat from invading weeds. In addition, the distribution of Edith’s checkerspot (of which Quino is one of many sub-species) is shifting away from southern California under climate change, indicating that the location and nature of suitable habitat for Quino is likely to change.  Given the degree of habitat fragmentation in the area, these butterflies may not be able to reach new suitable habitat patches on their own, making captive release programs an important management tool.

The intent of CBI and partners is to reestablish one or more populations of Quino in or near an area where they have been extirpated with the hope that the reestablished populations will spread to nearby habitat patches, thereby improving connectivity. An additional goal is to improve captive breeding protocols and develop an effective release strategy. Captive release has not been tried before with Quino checkerspot butterflies, and part of this groundbreaking work is developing effective methods. 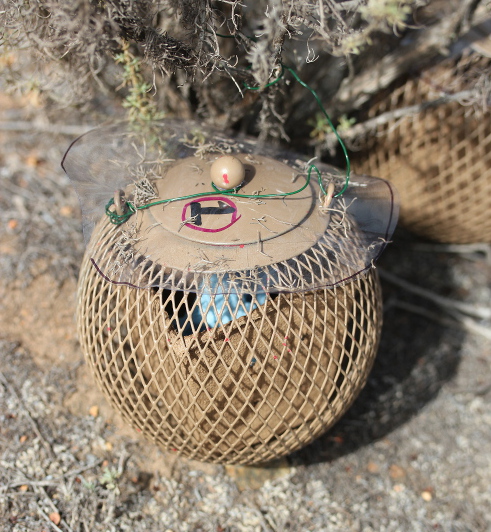 In December 2016 the project team released over 700 Quino larvae at the San Diego National Wildlife Refuge in an area which used to support Quino.  The site was selected because it has a high density of the larva’s host plant (Plantago erecta) and is predicted to change the least under climate change based on climatic water deficit data.  Larvae were placed inside specially designed release pods developed by the San Diego Zoo.  Each pod was constructed using a sphere of wire mesh (a repurposed Christmas ornament) to protect the larvae from large predators (such as birds), a small interior pot to support the larvae, and a plastic disc to shield larvae from intense rain.  Larvae (measuring 4-6mm at the time) were placed inside these pods while they were still in diapause (a life stage similar to hibernation), with the hope that natural cues would wake them up under ideal conditions.  Pods were wired inside shrubs to keep them shaded and near areas likely to contain the host plant. Quino larvae began emerging from release pods in early January 2017 and have grown up to 1cm.  Following this success, an additional 700 larvae were released in pods mid-January.

This project requires collaboration from many partners. CBI is tasked with coordinating the project, providing reports, and monitoring host plants. The Carlsbad office of the Fish and Wildlife Service obtained funding for the project, and collected adult butterflies and larvae from the wild for rearing. The San Diego Zoo hand-reared the larvae and developed the release pods. The San Diego National Wildlife Refuge scouted appropriate release sites on the refuge, and will conduct surveys for adults. San Diego State University is monitoring the released larvae in the field, and the Creekside Center for Earth Observation is consulting on the release using its previous experience gained working with the Bay Checkerspot butterfly.  Recon Environmental Inc. is managing the weeds on the site.

Based on previous work with the Bay checkerspot butterfly, CBI and partners understand that multiple releases of the Quino checkerspot butterfly are needed for re-establishment of a population. Expanding the effort to other habitat patches nearby could also be an important next step in developing a resilient population.  To read more about this project, you can check out the featured story from the USFWS. To see a video of a quino checkerspot larvae click on the file below.