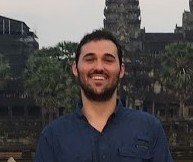 Zac Canter joined the CBI team as a part-time GIS Analyst and Project manager in March 2020. He works on a variety of CBI projects based in Santa Barbara. Alongside his work at CBI, he is currently pursuing his M.A. in Geography at UC Santa Barbara.

Zac also teaches part-time as a Teaching Assistant for UCSB Geography. He has taught a range of GIS courses, as well as ones in urban and regional geography.

Before grad school, Zac completed a B.A (2011) with double majors in Sociology and Philosophy, also at UC Santa Barbara. He also holds a B.S (2016) in Interaction Design from the Art Center College of Design in Pasadena, California.

His research interests include open data initiatives, geovisualization techniques, and spatial data science methods. In his free time, Zac likes to surf, garden, and root for the LA Dodgers and Rams.

The tool will serve as a community resource within the Santa Barbara County Conservation Blueprint and should improve communication, network building, and support community priorities through a regional approach to fire resilience and habitat health.