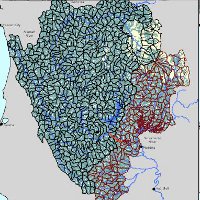 In November 2002, two science-based conservation organizations, the Conservation Biology Institute (Corvallis, Oregon) and World Wildlife Fund (Ashland, Oregon), conducted an ecological assessment of the mid and lower reaches of the Klamath, including its tributaries and the Upper Sacramento River that flows into the mid Klamath.

Ecosystem health was assessed using computer mapping (Geographic Information Systems – GIS) and satellite interpretation technologies across 870 watersheds; 655 within the mid and lower Klamath and 215 within the Upper Sacramento River. We used a series of indicators or surrogates to assess watershed condition on a relative basis, including road density, stream-road intersections, logging in the basin over a three-decade period, and mining activities.

Because this is the first subbasin assessment of relative ecological condition of the mid and lower Klamath River, this executive summary will focus mainly on the Klamath findings as they are particularly relevant to policy and legislative efforts to manage water uses and restore ecosystem health throughout the Klamath River. In addition, according to monitoring stations of the United States Geological Service, the Klamath is in worse shape today than it was in 2002, the year that 34,000 to 68,000 salmon and trout died from disease in the lower Klamath River due primarily to low water flows and high water temperatures.