Assessement of the Klamath-Siskiyou

A Science-Based Conservation Assessment for the Klamath-Siskiyou Ecoregion 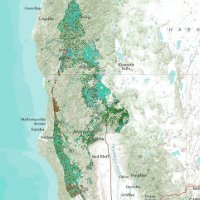 The Klamath-Siskiyou ecoregion of southwest Oregon and northwest California has long been recognized for its global biological significance and is considered an Area of Global Botanical Significance by the World Conservation Union, a global Centre of Plant Diversity, and has been proposed as a possible World Heritage Site. More recently, World Wildlife Fund US scored the Klamath-Siskiyou as one of their Global 200 sites reaffirming its global importance from the standpoint of biodiversity.

CBI used GIS as the principle tool to assess the state of the environment in the Klamath-Siskiyou and to develop a reserve design proposal based on the three-tracks. GIS is a computer-based analytical mapping technology that is rapidly becoming the cornerstone for conservation planning at many different spatial scales.

The proposed work plan called for the analysis to be focused at the 1:100,000-map scale using the best available data. While the 1:100,000 remained our target planning scale, we incorporated larger scaled data (e.g., 1:24,000) wherever possible. Doing so allowed for much more meaningful and reliable analyses. One of the greatest challenges throughout this project was evaluating and integrating the various data layers acquired from numerous sources.