Projected US Carbon Stocks with Land Use

Using MC1 to simulate future carbon cycling with land use. 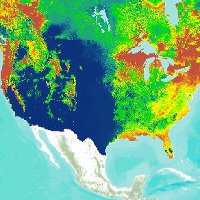 The LandCarbon project is a national assessment focusing on two interrelated objectives: 1) implementation of the 2007 Energy Independence and Security Act, Section 712; and 2) improved understanding of carbon sequestration and greenhouse gas fluxes in and out of ecosystems related to land use, using scientific capabilities from USGS and other organizations. The assessment covers all major terrestrial and aquatic ecosystems, is conducted for all fifty states, provides estimates of baseline as well as future potential carbon storage and greenhouse gas fluxes, and conducts analysis of effects of major natural and anthropogenic processes that impact ecosystem carbon storage and greenhouse gas fluxes. Major natural and anthropogenic processes include climate change, wildfire, land use change, and land management activities. Dr. Zhiliang Zhu is the project lead for the USGS.

In the first phase of the project, the modeling team at CBI was tasked to simulate potential vegetation dynamics and associated carbon and nutrient dynamics as well as wildfire occurrence and effects over the CONUS from 1895 to 2050 on a monthly time step at 30 arc s. (~800m) spatial resolution. The vegetation model used (MC2) normally simulates the types and characteristics of natural vegetation that would have existed for given climate conditions and ecosystem disturbance regimes (only wildfire is considered in this study), without considering human land use. For this project, the model was also modified to associate past and projected landuse with each grid cells starting in 1992.

Three management scenarios were simulated to provide a country-wide net ecosystem carbon balance: a scenario with potential vegetation only and no fire suppression, a fire suppression scenario with potential vegetation only and fire suppression starting in 1950, and finally a land-use plus fire suppression scenario (LU) that included both potential vegetation and managed lands starting in 1992.  Historical PRISM (Daly et al. 1994) climate from 1895 to 2010 was used for the historic period. CMIP3 projections of climate from 3 GCMs (CSIRO, MIROC and CGCM3) under the A1B, A2 and B1scenario were used as climate futures. Because there was interest in comparing the 3 management scenarios more closely, the model was run a second time to the end of the 21st century (2006-2100) for the three management scenarios and 9 climate futures using strided climate data (sub-sampling the 30arc sec. climate data to generate 8km results). Results will be presented in a USGS general technical report (currently in review - Aug 2014) and refereed journal publication(s).

In the 2nd phase of the project, CMIP5 climate projections will be used to estimate the national carbon balance and a carbon calculator tool will be designed to easily compare the various climate and management scenarios. An in-depth study of the fire and land-use history around Yellowstone National Park should allow comparisons with forested landscapes in North East China and projections of future carbon sequestration potential.