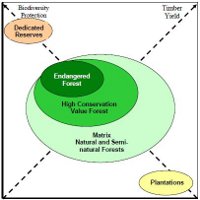 1. Protected areas form one of the main pillars of biodiversity conservation throughout the world. Only 1.2 percent of the Alberta Foothills is currently protected, which is woefully inadequate by any scientific standard.

2. Protecting the full array of native biodiversity (representation) is an extremely important consideration in a regional protected areas strategy.

3. Approximately 75 percent of the natural variability present in the Alberta Foothills (measured as enduring features) is not adequately represented in a network of protected areas.

4. Approximately 82 percent of the region is comprised of logging tenures and much of this same area is subjected to intensive oil and gas development.

5. Change detection analysis has shown that nearly 9 percent of the ecoregion (~640,000 ha) has been impacted by activities visible from space since 1990 and much of this has been either by a growing network of oil and gas infrastructure or as clusters of clearcut logging. Impact on some species (e.g., woodland caribou) far exceeds this area.

6. The region contains over 36,000 wells, numerous pipelines, and thousands of kilometers of seismic exploration.

7. The Alberta Foothills no longer possesses large intact forest landscapes (undisturbed blocks >50,000 ha), but approximately 1/3 of the region is comprised of smaller forest remnants (over 2,100 with mean size of 1,500 ha) which forms the natural backbone of the region and form one of the major building blocks for protecting the many ecological values identified in the region.

8. Biodiversity values evaluated in the endangered forest mapping included: (1) rare forest types (old growth and less fragmented forests), (2) locations of rare and endangered species and their special habitats, (3) woodland caribou, (4) grizzly bear, (5) freshwater species such as bull trout and arctic grayling, and (6) forest and water-dependent bird species. Many of these values are being seriously degraded and some threatened with local extinction.

9. Decision support mapping results highlight areas within the Alberta Foothills that still contain high values and some of these values are of global or national significance. The highest scoring areas should be considered as candidates for an expanded protected areas network for the region. Recommended starting target should be approximately 16 percent of the ecoregion including existing and new protected areas. Failure to act will result in numerous species extirpations and significant loss of overall ecological integrity, including the degradation of several important ecosystem services.

10. In addition to new protected areas, landscape connectivity along waterways and over land should remain as an important consideration in an overall regional conservation strategy.

11. To be effective, an expanded protected area network alone will not be enough to maintain the conservation values present in the region today. New protected areas should be established strategically in the context of a region under dramatic pressure from development and extractive use. Management and even restoration in some areas should also be considered in an overall plan to achieve ecological sustainability.

12. The combination of Neatweaver®, EMDS®, and ArcMap® provides a powerful decision support planning tool set that can successfully address the topic of High Conservation Value and Endangered Forests.