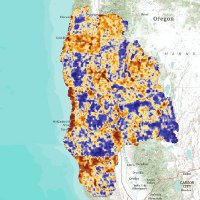 This project will produce decision-support maps and tools to support an Interagency Fisher Biology Team in developing and implementing a Conservation Strategy for the west coast fisher Distinct Population Segment (DPS)--a Candidate for listing under that Endangered Species Act that stretches from southern British Columbia through Oregon, Washington, and California.  The Interagency Fisher Team includes representatives of the US Fish and Wildlife Service, US Forest Service, and other Federal, State, and Provincial agencies with an interest in species conservation and forest management.

CBI will prepare maps, analyses, and other decision-support tools, including habitat value, habitat connectivity, and population distribution maps for the DPS under current conditions, and an assessment of climate-change effects on fisher habitat and populations in the future.  These types of spatially explicit decision-support tools are needed to inform conservation planning and adaptive management to sustain and restore habitat value and fisher populations within the fisher DPS.