"Missing Middle" of a Wildlife Corridor

The mid-section of the Puente-Chino Hills Wildlife Corridor 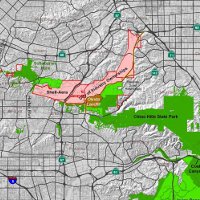 The Puente-Chino Hills Wildlife Corridor is a peninsula of mostly undeveloped hills jutting about 42 km (26 miles) from the Santa Ana Mountains into the heart of the densely urbanized Los Angeles Basin. Intense public interest in conserving open space here has created a series of reserves and parks along most of the corridor’s length, but significant gaps in protection remain. These natural habitat areas support a surprising diversity of native wildlife, from mountain lions and mule deer to walnut groves, roadrunners, and horned lizards. But maintaining this diversity of life requires maintaining functional connections along the entire length of the corridor, so that wildlife can move between reserves—from one end of the hills to the other.

Already the corridor is fragmented by development and crossed by numerous busy roads, which create hazards and in some cases barriers to wildlife movement. Proposed developments threaten to further degrade or even sever the movement corridor, especially within its so-called “Missing Middle.” This mid-section of the corridor system, stretching from Tonner Canyon on the east to Harbor Boulevard on the west, includes several large properties proposed for new housing, roads, golf courses, and reservoirs. Such developments would reduce habitat area and the capacity to support area-dependent species and, if poorly designed, could block wildlife movement through the corridor.

This report builds on an impressive array of previous ecological and wildlife movement studies in the Puente-Chino Hills, as well as the general literature on wildlife movement corridors as it applies to this unique peninsula of wildness. It supplements the existing information with an analysis of gaps in protection—with special focus on the vulnerable Missing Middle—and recommends conservation and management actions to prevent further loss of ecological connectivity and retain native species.