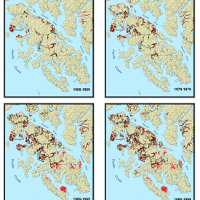 CBI staff worked on a comprehensive analysis of inventoried roadless areas within six ecoregions of the Pacific Northwest encompassing the range of the northern spotted owl (Strix occidentalis caurina) east and west of the Cascade Mountains in Washington, Oregon, and northern California revealed that roadless areas contributed to:

This document is a synthesis of the literature on roadless importance, drawing primarily on the published studies presented in the bibliography and available from the World Wildlife Fund and the Conservation Biology Institute. The authors of this document have spent nearly a decade compiling databases and conducting satellite imagery and computer mapping assessments that document the importance of roadless areas and the extent of forest fragmentation across the nation. This document provides a scientific foundation in support of lasting protections for roadless areas.