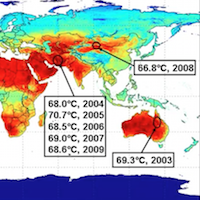 David Mildrexler, a PhD candidate at Oregon State University and Wilburforce Conservation Fellow, presented the following webinar on June 12, 2015 at 10am PST:

This webinar was based on David's presentation at the 2014 American Geophysical Union Fall Meeting.

Short description: Land Surface Temperature (LST) is a good indicator of the surface energy balance because it is determined by interactions and energy fluxes between the atmosphere and the ground. The variability of land surface properties and vegetation densities across the Earth’s surface changes these interactions and gives LST a unique biogeographic influence. Natural and human-induced disturbances modify the surface characteristics and alter the expression of LST. This results in a heterogeneous and dynamic thermal environment. Using satellite-based LST we have developed a new global metric that focuses on one critical component of LST that occurs when the relationship between vegetation density and surface temperature is strongly coupled: annual maximum LST (LSTmax). A 10 year evaluation of LSTmax histograms that include every 1-km pixel across the Earth’s surface reveals that this integrative measurement is strongly influenced by the biogeographic patterns of the Earth’s ecosystems, providing a unique comparative view of the planet every year that can be likened to the Earth’s thermal maximum fingerprint.  We show how changes in specific components of the histogram indicate major changes in the Earth system. 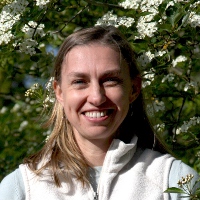