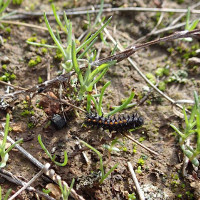 Spring Strahm, M.S.
Conservation Ecologist | Data Analyst
858-243-2534
CBI, in partnership with US Fish and Wildlife Service (USFWS), San Diego Zoo, San Diego State University, Creekside Center for Earth Observation and Recon Environmental Inc, is working towards the recovery of the Quino checkerspot butterfly in San Diego County by increasing the number of stable populations and total number of individuals of this species on the San Diego National Wildlife Refuge.
Quino used to be one of the most abundant butterflies in San Diego County, though now it is very uncommon and rarely seen in high numbers. Quino are threatened by a lack of habitat connectivity which is key for its population structure and resilience. Primary drivers of decline include fragmentation from development and loss of suitable habitat from invading weeds. In addition, the distribution of Edith’s checkerspot (of which Quino is one of many sub-species) is shifting away from southern California under climate change, indicating that the location and nature of suitable habitat for Quino is likely to change.  Given the degree of habitat fragmentation in the area Quino may not be able to reach new suitable habitat patches on their own, making captive release programs an important management tool.
The intent of CBI and partners is to reestablish one or more populations of Quino in or near an area where they have been extirpated with the hope that the reestablished populations will spread to nearby habitat patches thereby improving connectivity. The site chosen for reestablishment, of the available sites on federal land, is predicted to change the least under climate change based on climatic water deficit data. An additional goal is to improve captive breeding protocols and develop an effective release strategy. Captive release has not been tried before with Quino checkerspot butterflies and this groundbreaking work to support the species is reliant on effective and strategic methodology.
Based on previous work with the Bay checkerspot butterfly, CBI and partners understand that mulitple releases of the Quino checkerspot butterfly are needed for re-establishment of a population. Expanding the effort to other habitat patches nearby could also be an important next step in developing a resilient population.