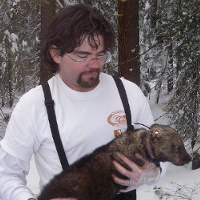 Dr. Thompson’s background includes a blend of landscape and wildlife ecology, specializing in the relationship between large-scale habitat change and the interactions between predators, competitors, and prey. He has worked with a wide variety of sensitive carnivore species, including black-footed ferrets, island fox, swift fox, bald eagles, and mountain lions in numerous western states. He has served as a technical advisor for wildlife-related issues to numerous organizations and efforts, including the Dinkey Collaborative Forest Landscape Restoration Project in the Sierras, the Blackfoot-Swan Landscape Restoration Project in northern Montana, and the California Academy of Sciences. Currently, he lives in Missoula, MT and is applying this background to the development of resiliency-based forest management regimes in both the Sierra Nevada and Rocky Mountain regions.

CBI is working with USFWS and USFS to identify important landscape connectivity areas in the lower and mid-Klamath Basin for the Pacific marten and the Pacific fisher.

CBI is assisting the US Forest Service, Region 1, with reconciling habitat conservation efforts with long-term forest resiliency planning in the northern Rocky Mountains.

Fisher Conservation in the Sierra Nevada

Back in the late 1970s, Dr. Reg Barrett at the University of California Berkeley told the US Forest Service that their biggest looming conservation problem in the Sierra Nevada was going to be a large weasel called the fisher. Dr. Barrett saw the fisher's dependence on large, old trees and dense canopy forest as a source of conflict with timber and fire management. It took almost 30 years for Dr. Barrett’s prediction to come true, but by ...