Data and information about the importance of roadless areas in Oregon 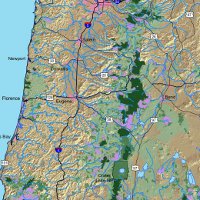 National interest in roadless area conservation dates back to the 1970s when the Forest Service was directed by Congress to inventory roadless areas in response to the public's growing desire to protect wild landscapes primarily through wilderness designations. In 2001, President Clinton enacted the Roadless Conservation Rule to protect 58.5 million acres of inventoried roadless areas on Forest Service lands, including nearly 2 million acres in Oregon. However, on May 13, 2005 the Bush administration issued a revised rule that established a process for governors to propose locally supported regulations for conserving roadless area within their states. While some states, including Oregon, have legally challenged this rule change, State governments will continue to play a vital role in providing recommendations to the Forest Service concerning the protection of federal roadless areas. This report provides new information on the importance of roadless areas in Oregon that places these areas among the most ecologically valued in the nation, thereby providing a scientific foundation for protecting all of Oregon's roadless lands regardless of the method to achieve this outcome.