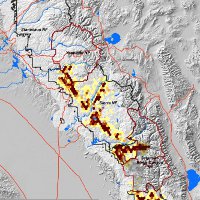 The fisher (Martes pennanti) is a large member of the weasel family associated with dense, structurally complex, low- to mid-elevation forests. Remaining populations in the western U.S. are small, disconnected from one another, and threatened by habitat modification and fragmentation.  In 2008 fishers occupied less than half their historic range, having apparently been extirpated from the central and northern Sierra Nevada. A small population persist in the southern Sierras, south from Yosemite National Park to the vicinity of the Greenhorn Mountains in southern Tulare County.

The Conservation Biology Institute (CBI) was commissioned by Region 5 of the U.S. Forest Service to compile all available data on fisher populations and habitat in the southern Sierra Nevada, assess their current status, and predict how they are likely to respond to various alternative forest management actions, as well as unmanaged events such as wildfires, drought, or bark beetle outbreaks. The project was designed to create a scientifically credible set of habitat maps and estimates of fisher population size and distribution in the southern Sierra Nevada based on current conditions and likely future change under a range of alternative scenarios.

A group of independent science advisors was assembled to oversee the technical aspects of the analysis and ensure use of best available science.  Stakeholder groups were kept informed via stakeholder representatives from the timber industry, conservation organizations, the US Fish and Wildlife Service, California Department of Fish and Game, and the various National Parks and Forests in the studya are.  CBI worked closely with experts from the Pacific Southwest Reserach Station and Region 5 to ensure that the analysis accurately reflected proposed forest management actions.