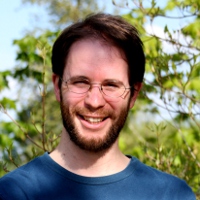 Brendan Ward joined the Conservation Biology Institute in December 2007.  He has brought experience in GIS, spatial analysis, ecological modeling, and software development to the institute.  Brendan has a passion for harnessing computer power to advance conservation science and ecological research.  He aspires to contribute to model and data fusion, to enable a greater degree of synthesis and cross-pollination across disciplines to fully catapult ecology into the information age.

Brendan is currently contributing heavily to the development of the Data Basin project, a cutting-edge conservation data commons and analytical platform.  He is tasked with locating, cataloging, processing, and uploading hundreds of conservation-relevant datasets.  He has contributed to the design and functionality of Data Basin, and has developed numerous programs in support of the processing pipeline required to get datasets standardized for upload to the site. Brendan has also contributed to other projects at CBI, including estimation of fisher habitat in the Sierra Nevadas a function of fire and fuel management, and development of additional extensions for the landscape simulation model LANDIS-II.

Brendan earned his M.S. in Forest and Landscape Ecology at the University of Wisconsin– Madison, and his B.S. in Environmental Science at the Huxley College of the Environment, Western Washington University.  From 2004 to 2007, Brendan worked for the LANDFIRE project at the US Forest Service Rocky Mountain Research Station – Missoula Fire Sciences Laboratory. During that period, he was the technical team lead of the fire regimes mapping and modeling team, and was heavily involved with simulating historical fire regimes for the United States and determining the degree of ecological departure between historical vegetation conditions and contemporary vegetation.  He also contributed heavily to other critical processes within LANDFIRE, lending his expertise in programming and spatial analysis to develop mission critical software applications still in use today.

Brendan currently lives in Corvallis, Oregon with his wife Amy.  He enjoys raising all sorts of domestic and non-invasive exotic members of the Plantae kingdom.  He also enjoys woodworking, including guitar-building and furniture-making, as well as pottery, photography, pen-and-ink drawing, and the occasional bout of recreational programming.

Rapid Ecological Assessment in the Colorado Plateau, for the BLM

Working as a subcontractor to Dynamac Corporation, the Conservation Biology Institute provided the scientific leadership and technical support for two BLM Rapid Ecoregional Assessment (REAs).  The Sonoran Desert ecoregion was completed in the spring ...

I recently returned from a short trip to Glacier National Park in Montana.  It was truly an amazing time of the year to go, because it was still early enough in the season that the park had very few visitors.  One of the main attractions - Going to the Sun Road - would not open completely for another 3 weeks.  What struck me as remarkable, and somewhat ironic, was the amount of wildlife we observed in very close proximity to the ...